Among the different amazing things I discovered in Ecuador, what I did not expect to impress me was the food. And yet I was pleasantly surprised! I had no idea Ecuador had such good food! I heard about Peruvian food but never about Ecuadorian one.

Since I arrived, I discovered many different traditional dishes, and I have to say that I’ve never been disappointed! Ecuador is a small country but its food is very diverse, and portions are always generous from what I experienced. Each part of the country has its own specialities, and I particularly love the food on the coast, which has a lot of seafood!

So far, tigrillo, ceviche de camarón and encebollado have been my absolute favourite meals (these 3 meals are traditional from the coast)! Tigrillo is a breakfast dish of mashed green plantains, egg, and cheese. Being a huge fan of both eggs and cheese, I fell in love with this dish, all the more so since it is very nourishing and a good way to start the day. I’ve never been used to eating plantains in France, so it’s also very nice to try something new!

As for encebollado and ceviche: encebollado is a fish soup made with fresh tuna, yuca or cassava root, tomatoes, onions, cilantro and spices, while ceviche de camarón is a dish made of shrimps which are cooked before they are marinated in the acid of the lime juice. I think what I really love about these two dishes is the mixture of flavours and the combination of fish/seafood with acidity! It’s delicious! When I was in San Lorenzo in the South of Manta, I ate an amazing ceviche!!

Not to be outdone, the rest of the country also has a lot to offer. Regarding meat, I tried roasted guinea pig recently, which is very traditional in Ecuador. I was both looking forward to it as well as a bit reluctant as I found it to be a bit unusual and culturally shocking (since guinea pigs are our pets in France and nothing more). But then, travelling is also about getting out of your comfort zone and opening yourself to other cultures, so I would recommend you to try it! If you would like to try another unfamiliar meat, I would suggest “seco de chivo”, which is a goat stew made with onions, green peppers and tomatoes, or “fritada”, which is basically fried pork. Otherwise, a more “common” option for good meat would be the “churrasco” – or Ecuadorian grilled meat – which is a delicious dish of beef accompanied by white rice, fried eggs, french fries, salad and avocado. 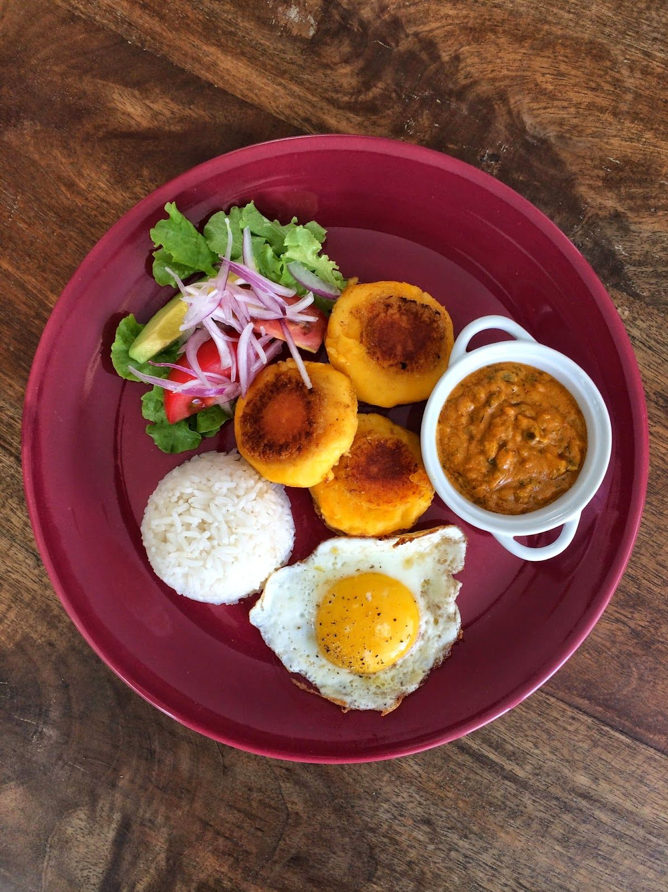 Apart from the meat, if you like potatoes and avocadoes like I do, Ecuador has very nice options as well, such as the delicious potato soup that contains cheese and rinds, and that is usually served with avocado and toasted corn, or “llapingachos”, which are fried tortillas made with boiled potatoes and filled with cheese, usually accompanied with peanut sauce, chorizo, fried egg, salad, and avocado.

Finally, I’d like to finish with a meal that I really love: the “empanada de morocho”. It is a fried pastry that uses morocho – or white corn – for the dough. When fried, these empanadas become crispy. Inside them, you may find different meat options along with rice, peas, and carrots. It is delicious, I could eat that for breakfast, lunch and dinner every day!

To summarize, Ecuador has amazing landscapes and sceneries, but it also has incredible food that you cannot miss!

Here is the list of the 10 traditional dishes mentioned above: