San Cristobal is the eastern Island of the Galapagos, rather small compared to Santa Cruz and Isabela, the island still has a lot to offer! This was the first stop in my trip around Galapagos, let me tell you about my magical stay in this little paradise full of beaches, places to snorkel and amazing wildlife!

After landing at San Cristobal Airport, a few minutes' rides took me to Puerto Baquerizo, the main village of the island. Taking a walk around the harbour, I was already amazed at all the animals roaming around: pelicans, blue-footed boobies, iguanas and my favourite ones: sea lions! They can be seen everywhere around town: in the middle of the sidewalk, on the beach, or even lying on benches!

When it comes to sea lions, a 30-minute walk to Playa Loberia is a great way to view even more of them. This gorgeous beach is home to many sea lions, and if you go snorkelling there, you can even encounter sea turtles!

After enjoying my first swim in the Galapagos Islands' seawater and drying off in the sun of Playa Loberia, I went on a walk on a little trail heading behind the beach. I was told to be careful not to step on iguanas on my way as there were a lot of them "hiding" among the rocks, their black colour making them difficult to spot on the black rocks. I was not lied to:  the iguanas were everywhere! 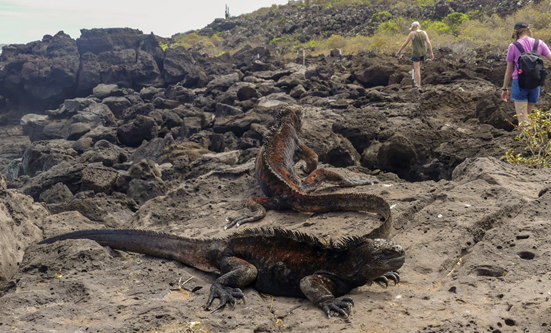 On the next day, I took a taxi ride to visit the rest of San Cristobal Island. My first stop was the Tortoise Breeding Centre, where I got to see tortoises of all ages being raised and cared for until they're old enough to be released in their natural habitat. The next stop was Puerto Chino, a serene and gorgeous beach accessible through a trail lined with gigantic cactus!

Later that day, I went to Playa Mann, which is one of the closest beaches to the harbour, and I had the opportunity to swim with sea lions; seeing them up close in the ocean was incredible! While they spend much of their time above sea level lazing around, sea lions are far more agile and quick underwater.

Following the coast a little bit more after Playa Mann, you can reach the bay of Tijeretas. Shielded from the wind, the water there is very calm and transparent, making it a lovely place to spot a lot of marine creatures again! I was quite surprised to get face to face with an iguana underwater, I was used to seeing them above the sea but didn't expect them to also be able to swim!

Finally, what I enjoyed the most about San Cristobal is that there were a variety of different beaches or snorkeling spots surrounding Puerto Baquerizo, all accessible with a short walk and all full of wildlife that I had never seen before!